Issues contained within include:
(1) HB 416 by Riddle is a bill intended to require the employees of facilities offering abortions to be trained to recognize victims of sex trafficking. HB 1435 would prohibit abortion coverage in health insurance plans purchased via Affordable Care Act exchanges. The two appear to be unrelated.
(2) HB 1435 History shows no activity on May 24, 2015
(3) HB1444 from the 83rd Regular Session has to do with revamping and modernizing the use and applicability of advance medical directives and “Do Not Resuscitate” orders. This bill addressed the issue of a Terry Schiavo situation, as well as the case of the family in San Antonio where a pregnant mother was kept alive against the wishes of the family. There were 5 Authors and 13 Co-Authors of the bill. The characterization of the bill as “involuntary euthanasia legislation” could be considered grossly misleading.
(4) HB 1435 History
(5) “Valoree Swanson” Campaign filings 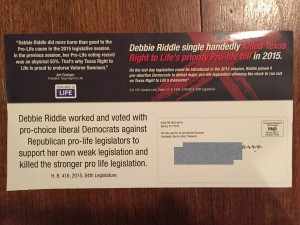 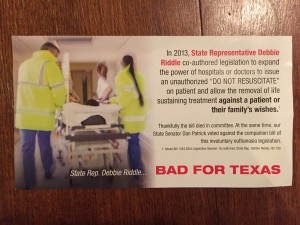