It has come to my attention that the race for Harris County Criminal Court at Law Number 8 has become very contentious between the incumbent, Judge Jay Karahan, and his challenger, Mr. Dan Simons, a former Harris County ADA and currently defense attorney in private practice.

Judge Karahan had published a website www.neverdansimons.com, and publicly shared it on his judicial campaign webpage, social media, as well as many others on his email database. If you go to this website link, you will see that it is basically a smear campaign page.

I have reached out to Mr. Simons and asked him to address these very serious claims and allegations. He had provided me with the documentations to prove what Judge Karahan published on this website, neverddansimons.com, is false and libel with the intention of smearing and damaging Mr. Simons’ character. In this email, I will be addressing two of the many allegations on the website. I will be sending more documentations proving that every claim on the website is false and misleading on the days to come.

Ladies and gentlemen, I am all in favor of healthy competition between Republican primary candidates; however, this kind of behavior, especially that of a presiding judge is very alarming and quite frankly, makes the Democrats very happy. Above all, these dirty attack tactics really harm the integrity and reputation of the Republican party as a whole.

Furthermore, as noted in an article written by Big Jolly Politics, Judge Karahan violated the Texas’s Online Impersonation Statute, Penal Code Section 33.07, a third degree felony. I ask that you stand with me to reprimand Judge Karahan for his baseless attacks of another candidate. Reprimanding Judge Karahan will set precedent and prevent future Republican candidates from using this kind of mudslinging tactic towards each other. We must protect the integrity of our party.

Below please also see Mr. Simons’ response to my inquiries. 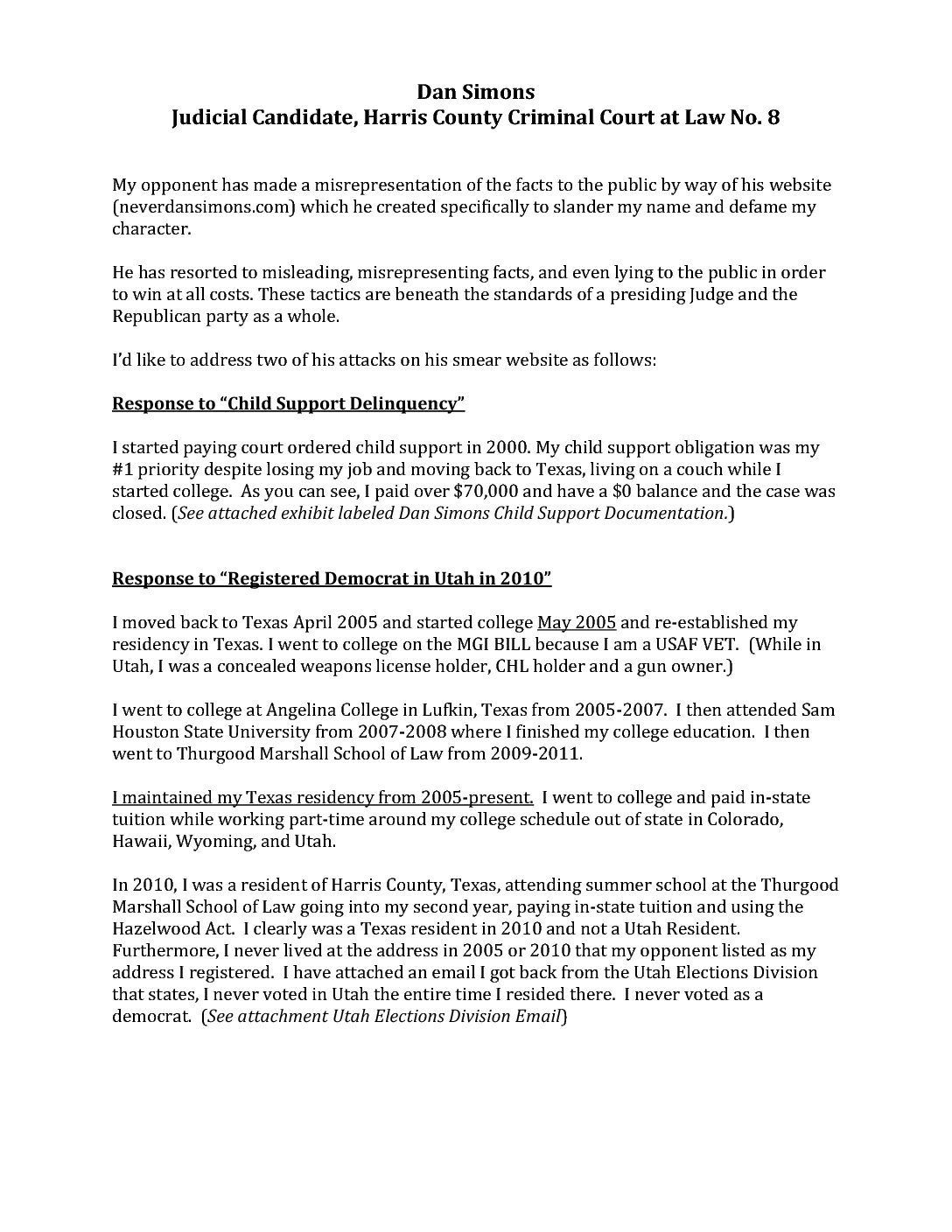 I will answer each allegation and show it is false or misleading. I have attached my response to the allegations over child support and being a Utah democrat.

If you have any more questions, please let me know.

I would like the truth to get out there that my opponent is choosing to lie and mislead potential voters about me.

As a concerned Republican activist in Harris County, it’s come to my attention that the race for Harris County Criminal Court at Law No. 8 has become quite contentious between the incumbent Judge Jay Karahan and yourself.

There are allegations on the website Judge Karahan published, neverdansimons.com, that I’d like to receive some explanation for. If you would be so kind as to please address these allegations for me, I’d really appreciate it.

Thank you for your time.

On January 8th, as a concerned Republican activist/leader in the community, I sent out an email to you regarding the unethical actions of Judge Jay Karahan (with concrete proof and evidence in place.)

In retaliation to my email, Judge Karahan asked one of the Precinct Chairs and his biggest supporter, Mr. Rolando Garcia, to send out an email to you accusing me of lying and attacking my integrity by claiming that I was Mr. Dan Simons’ paid consultant. The finance reports will soon prove once and for all that I have not received any payments from Mr. Simons. My ONLY motive was to bring to your attention the shameful behavior of a presiding Republican Judge.

Today, I feel obligated to email you, once again, about a much more urgent and serious matter regarding Judge Karahan’s unethical actions. Attached please find a Facebook post from Mr. Walter West, exposing Judge Karahan’s post to the “Houston Theatre People” group to solicit the Democrats’ votes. Judge Karahan is deliberately attempting to entice the Democrats to skew the vote in a Republican Primary Election.

Ladies and gentlemen, it’s just so incredibly disturbing to me that he would go to such length to dishonor our party. Why would an incumbent Judge who claims that he is a lifelong conservative Republican ask the Democrats to vote for him in the Republican Primary Election? And in the same post…. tell them that they can go back to vote for their “Democrat favorites” in the general election? Does he not know that we’re facing a tough general election and that we cannot afford to lose any seats in November to the Democrats? This is his own words, ladies and gentlemen. There is not a conspiracy theory that because I am Mr. Simons’ biggest supporter, therefore I am lying for him. In fact, if you’re a Facebook user you can go see it for yourself in the Houston Theatre People Page, (if he doesn’t delete it by the time you get there.)

In my last email, I asked you to stand with me to reprimand Judge Karahan’s unethical behavior. He is using dirty tactics and baseless lies to try to take down another Republican candidate. I tried to appeal to you to take swift action to protect the integrity and reputation of our party.

I am appealing to you, once again, to reprimand this republican candidate who has chosen to abandon our republican values and beliefs. Please also be informed, that Mr. Walter West had notified the leaderships at Harris County Republican Party as well as the Republican Party of Texas of Judge Karahan’s unethical actions.

Attached you will find documents proving that Mr. Simons never voted as a Democrat 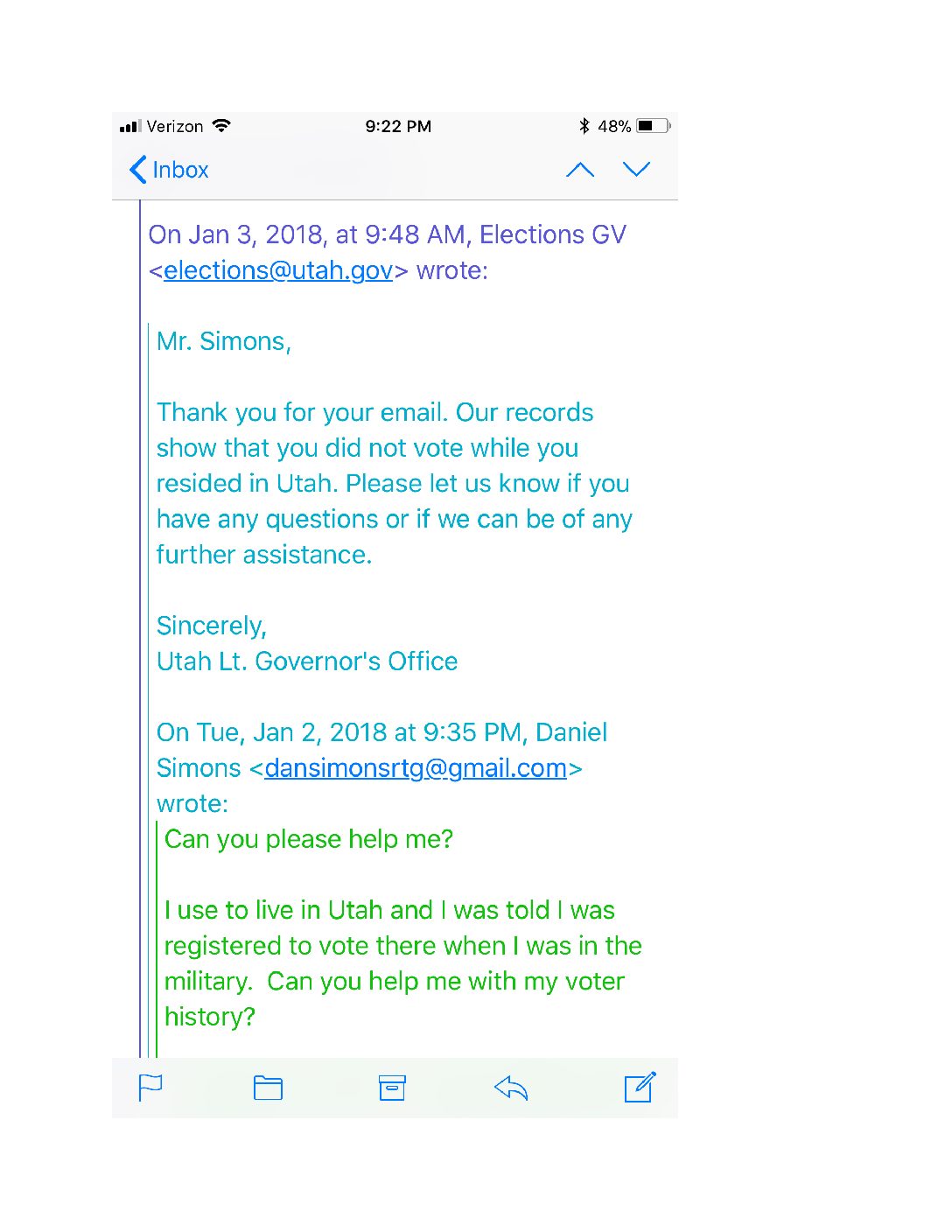 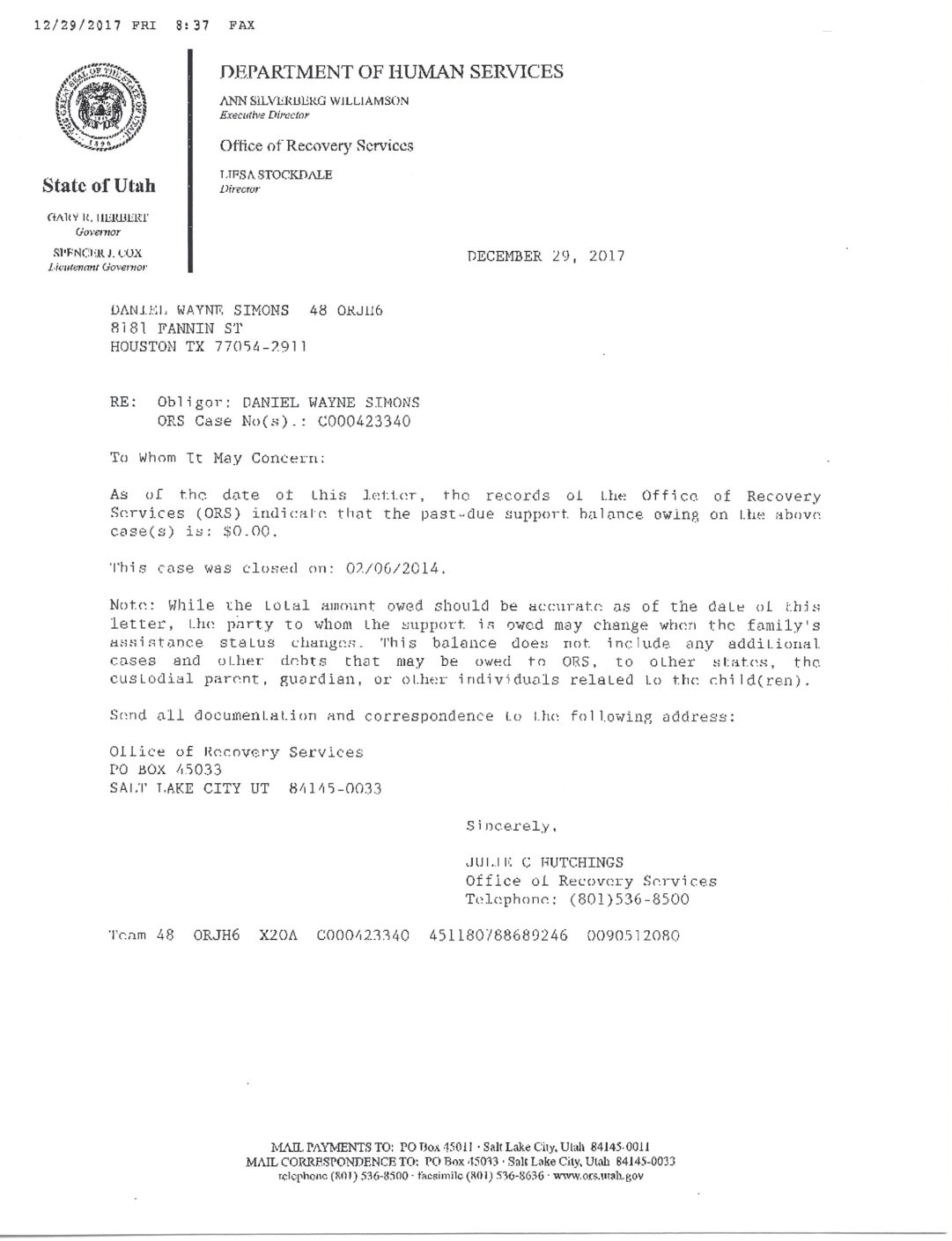 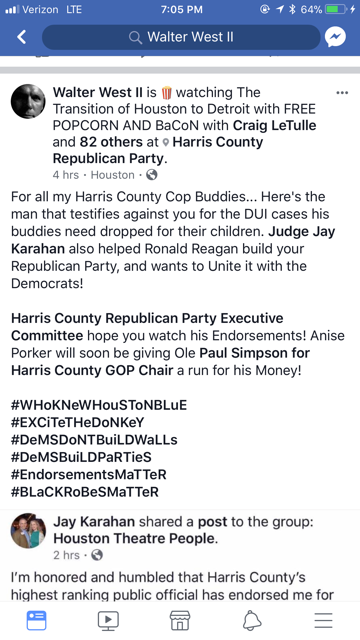 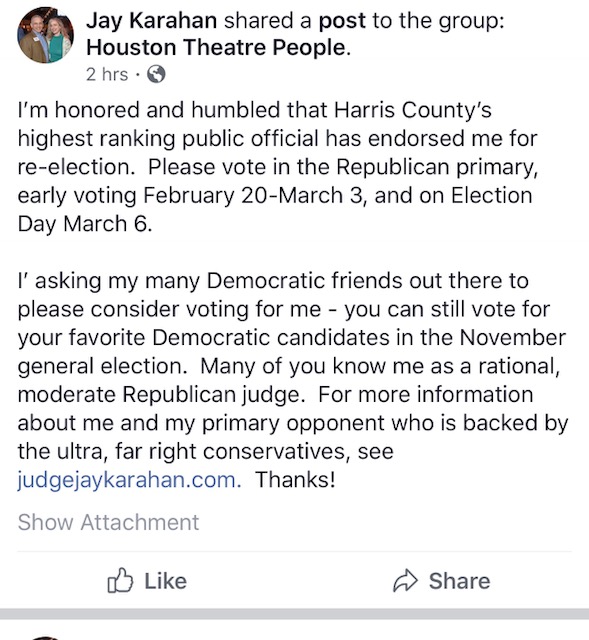